Skyler Clark ...is a Game Designer, Developer, and Software Engineer. 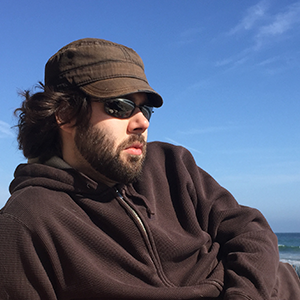 I can't remember ever not loving games. At 6, I programmed a simple game in Quick Basic while sitting on my grandpa's knee. At 7, I dreamt up the solution to a puzzle in Link's Awakening. It worked. At 10, I released my first game, Mars Attacks, on a floppy disk at recess. In high school I spent many evenings playing Natural Selection, and in doing so I began to learn how to speak up and lead a team. I kept programming and designing, modifying and improving games; thinking about game development in my every waking moment. Plus a few more dreaming ones.

I got a degree in game development from Worcester Polytechnic Institute, then moved to California to earn a MS in Computer Science from the University of Southern California. Immediately out of USC, I landed a job with Infinity Ward where I helped to develop two Call of Duty releases. After which, I moved back to the east coast. Since then I've been working on my own projects, and on multiple games, including a VR experience nominated for Game of the Year, Gnomes & Goblins!

Together with Jon Fravreau and the team at Wevr, we created a high fidelity VR experience which got nominated at the VR Awards for Game of the Year! I am very proud of what we built.

A long time ago, I had a vision for a card game where you could never be eliminated. You could be down but never out. No matter how bad things get, if there's a breath left in your body, you could come back and steal the win. Ritual.

While I've developed this game and tweaked its mechanics, I have also grown professionally. I've coordinated with freelancers across the globe and wore many different hats, including: creative director, producer, project manager, and publisher. I've devised ways to fix 'eternal comeback' and 'kingmaker' issues within the game's mechanics. I found ways to add strategic unpredictability while keeping Ritual simple, easy to learn, and quick to play. I've poured my heart and soul into it and it's nearly ready. I plan to run a Kickstarter campaign to raise funds for the first print run. Watch this space.

Natural Selection 2 was an enormously ambitious game by Unknown Worlds Entertainment (UWE). It blended FPS action and RTS tactics in a team-based, multiplayer game. After launch, UWE called upon the most active members of the NS2 community to help continue to update and grow the game.

So, I jumped headfirst into an unknown code-base, and soon after what had originally started as a passion project for me evolved into a paying role leading a remote team spread across the globe. Having already done AAA game development at Infinity Ward, I was able to lend my experience to the team management, internal communication, and development pipeline.

On this team we believed in using a “transparent development process”; inviting the fans in to see our work, our process, and our plans. This did create some more complexities, but having our players so involved in the process was also very rewarding. Under my guidance we were able to achieve a biweekly patch schedule, improve a stale meta, and release new tutorials and game modes.

As Infinity Ward's first IP since Modern Warfare 3, there was a lot riding on Call of Duty: Ghosts. Because the excitement and expectations were so high, this is one project where I needed to stretch myself in many new directions. I worked with artists on new assets; I sat with designers to iron out mechanics and functionality; and I implemented a huge variety of features and optimizations, from UI to networking to gameplay.

The coolest thing I take with me from this project though is this: discovering the satisfaction and enjoyment that comes from teaching and advancing the skill sets of others. During this project I had the opportunity to mentor several co-workers on design and programming techniques and skills; helping them to become stronger developers.

The iOS app Silk is a hugely popular interactive generative art app from weavesilk.com. Anyone can create beautiful flowing art with Silk. I've seen this reflected in the audience which is incredibly diverse: ranging from toddlers to their grandparents. It's been utilized for everything from teaching, spiritual exploration, and therapy to just having fun. It's reception and reach has been incredible and seeing how many people it has touched has been very rewarding.

The website version allowed you to draw only one stroke at a time. My aim with the app was to give people a fantastic, multi-touch, finger-drawing experience with no compromise on speed (60 FPS). I wanted the app to run silky smooth no matter what you threw at it. I rewrote the Silk engine in C++ and GLSL. Try it now and you'll see you can draw — should you ever need to — with up to 11 fingers at once. Yes, I had to use my nose to test it.

I'm proud to say that the Silk app was:

After Infinity Ward's near collapse in 2010, the development and release of Call of Duty: Modern Warfare 3 was an opportunity to rebuild. So, I became part of a ten engineer team working to make that happen. At that time, Infinity Ward hired engineers as generalists and expected them to throw themselves into pretty much any task required. So there I was, straight out of grad school, the youngest and least experienced member of the team. The senior guys probably didn't expect what was to come.

I was more than ready for this challenge. By utilizing my knowledge of the Source engine I quickly got up to speed with IW's. I was soon making big contributions and earning the respect of much more experienced game developers. We hit the quality bar we were aiming for, and released on time to critical acclaim — solidifying the future of Infinity Ward.

After watching an episode of Doctor Who named "Blink", I was inspired to design a game which would capture an experience similar to the one portrayed in the show: a constant fear that there is something looming behind you and the sensation that you are always being watched. For my Major Qualifying Project (MQP) at Worcester Polytechnic Institute I had the opportunity to realize this design. I led a group of three students for six months to design and develop a Source-based multiplayer survival horror game with solid core mechanics that played well and captured all the feelings of fear, paranoia and invisible danger I had wanted to tap into.

Our play-testers loved it so much that they refused to leave at the end of the scheduled test sessions. They just kept playing and we eventually needed to kick them out so we could go home and sleep. Our college officials were so impressed that they awarded the project the Provost's MQP Award, an award for quality, given to the best senior project in each department. Who knew creating sheer terror could be so much fun?